SeaTalk, also known as SeaTalk1 to distinguish it from SeaTalkNG, is a proprietary bi-directional data interface developed by Raymarine for their marine products. SeaTalk carries marine data in a non standard serial format at relatively slow (4800 baud) speed. The segments of information that are transmitted through the SeaTalk bus are called datagrams and, in most cases, it is possible to convert those datagrams to equivalent Nmea 0183 sentences.

Switching the SeaTalk input on:

To select a port to receive Seatalk on the Nmea2 or Nmea4 we need to choose SEATALK, instead of 4800 or 9600, in the relevant baud rate combo box. On the Nmea4Wifi, Port 4 (P4) can be switched to accept Seatalk. On the Nmea2Wifi, Port 1 (P1) is used for Seatalk. The Nmea3Wifi has a dedicated Seatalk port that does not need any selection.

With the Nmea2Wifi and Nmea4Wifi multiplexers there are 2 options to power the multiplexers in a SeaTalk environment. In the left picture below we show an example of a Nmea4Wifi with power coming from the Seatalk bus. On a Nmea4Wifi, P4 is used (A4 and B4) to input SeaTalk data. (In the case of a Nmea2Wifi, Port P1 is used instead of P4). A second option (shown in the right hand photo) is to power the multiplexer directly from the main battery circuit. This  second option is more robust to noise as it takes advantage of the P4 differential type of input.

Like the Nmea2Wifi and Nmea4Wifi, the Nmea3Wifi multiplexer can accept SeaTalk, but it can also transmit data on the Seatalk bus.

The Nmea3 wiring is simpler, as the multiplexer has only one power input, and this 12V connection can be connected to the SeaTalk bus 12V wire, or to the main boat instrument 12V power. The SeaTalk input is clearly marked.  Many technical details of the conversions can be found in the Vela-Navega Forum and also here: NMEA 0183 to SeaTalk & Seatalk to Nmea 0183. 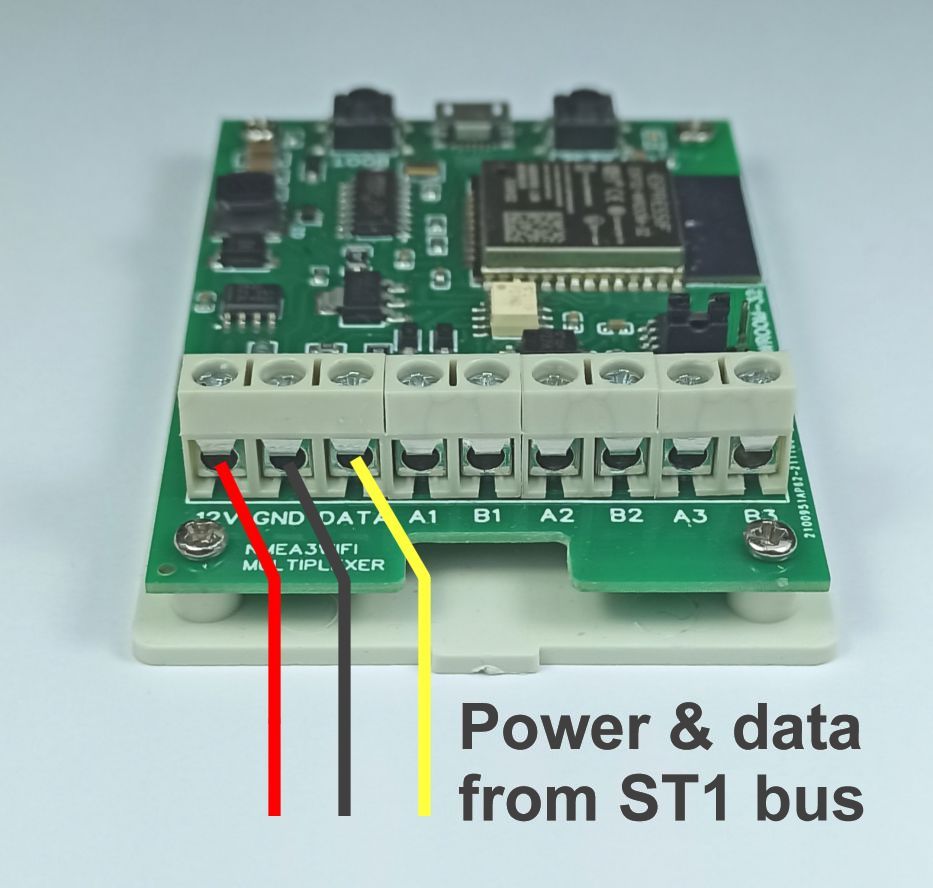